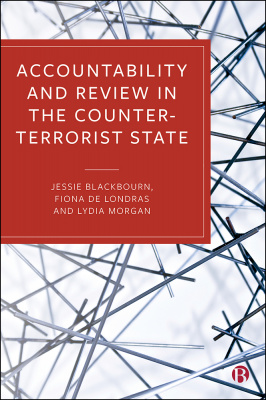 aints bodies (such as the Independent Office for Police Conduct), general regulators whose regulatees may have a role in making or implementing counter-terrorism (such as the Office for Students), and civil society.

We understand counter-terrorism review as involving the evaluation and assessment of counter-terrorist activities, laws, and policies according to a range of standards, some of which are legal, and others of which are political, social, or economic. We are interested in the three elements of evaluation identified by Deirdre Duffy: considering the merits of the matter under review, engaging with ‘reality’, and having capacity for action.  Building on this, we understand counter-terrorism review as legal, political, and policy processes that consider the application and impacts of counter-terrorism law and policy in theory as well as in practice, with a view to assessing its merits and contributing towards its improvement.

Taken together, these three characteristics suggest that counter-terrorism review should be retrospective; it should consider what has happened, its impacts and effects, rather than being predictive or anticipatory. But review cannot be understood in a linear fashion. Forward-looking processes, such as pre-legislative scrutiny, might involve an element of retrospective counter-terrorism review, considering the impacts and operation of existing law, or analogous provisions from other statutes, for example, even though that is not its primary purpose. Similarly, some structures of informal and networked activity within the larger edifice of counter-terrorism law and policy may mean that a non-formal, advance engagement might take place before any formal prospective or retrospective process begins. A government department might float a proposal with the chair of a relevant parliamentary committee before making a formal proposal and, in informing its response to a ‘speculative’ proposal of that kind, the committee or its chair may reflect on the operation of existing policies or laws. Or a regulatory body might engage in a consultation on proposed changes, and, as part of that, receive evidence on the operation of the law or policy as it currently exists which it then considers in deciding whether and how to proceed with the proposed new approach.